How to calculate carbon from board feet and cords

Foresters and wood buyers are increasingly being asked about the amount of carbon that trees and forests store. However, foresters and wood buyers do not inventory or buy their wood on a carbon basis. Instead, forests in many regions of the US are inventoried and sold using volume measurements such as board feet and cords. If a forest resources professional knows how measurements like wood volume relate to carbon, he or she can feel empowered when discussing the importance of forests and forest management in the context of carbon with landowners and decision makers.

This post describes how traditional wood measurements like board feet and cords can be converted to estimates of carbon stocks.

Converting from volume to carbon

Carbon can be found in a number of components in the forest, including live trees, standing and downed dead trees, understory vegetation, litter, and soil. In a healthy forest, soil pools are typically the largest carbon pool followed by live trees.

Carbon can be related to the volume of trees through traditional tree measurements such as tree diameter, height (merchantable and total), and species. Approximately half of a tree’s biomass is carbon, hence, hardwood species will generally have more carbon than softwood species.

As an example, consider two commercial species in the northern Lake States: aspen and red pine. Aspen is typically inventoried and purchased using cords per acre, while board feet per acre is used for red pine.

For these two species, an approximation to calculate the carbon per acre (measured in metric tons of live trees) is:

The figure below displays curves to convert volume to carbon for both of these economically- and ecologically-important species. Conversions were adapted from USDA Forest Service General Technical Report NE-343: 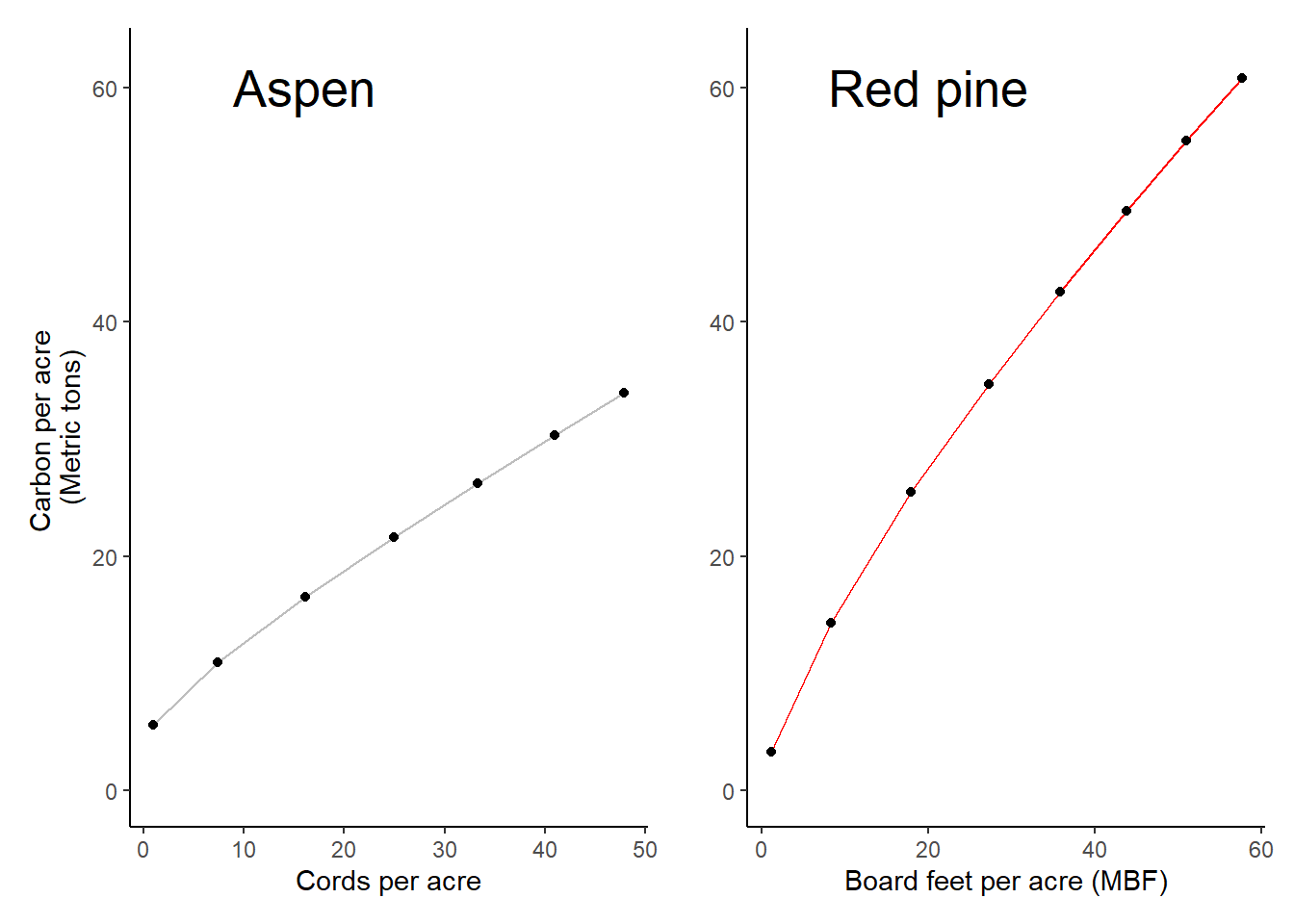 In practice, values of carbon in live trees are typically presented for all of the carbon found in live trees and do not subtract non-merchantable portions such as decay, defects, and tops and branches. General relationships between merchantable or growing stock volume can be related the total amount of carbon stored in a forest stand.

Since 1959, the Cloquet Forestry Center (CFC), a 4,200-acre experimental forest owned and managed by the University of Minnesota, has periodically measured 402 permanent sample plots across its ownership. Aspen and red pine are the primary species occurring on the property and management activities at the CFC are a good reflection of how these species are managed across the Lake States.

During the last forest inventory of the CFC in 2014, aspen and red pine cover types were identified on 92 and 102 permanent sample plots, respectively. In aspen stands the average volume was 27.3 cords per acre. Using the volume-to-carbon per acre approximation, this equated to an average of 21.0 metric tons of carbon per acre stored in live trees.

In red pine, the average volume was 42,000 board feet per acre. This equated to an average of 63.1 metric tons of carbon per acre stored in live trees.

Here is the distribution of carbon per acre for the aspen and red pine plots visualized in a violin plot: 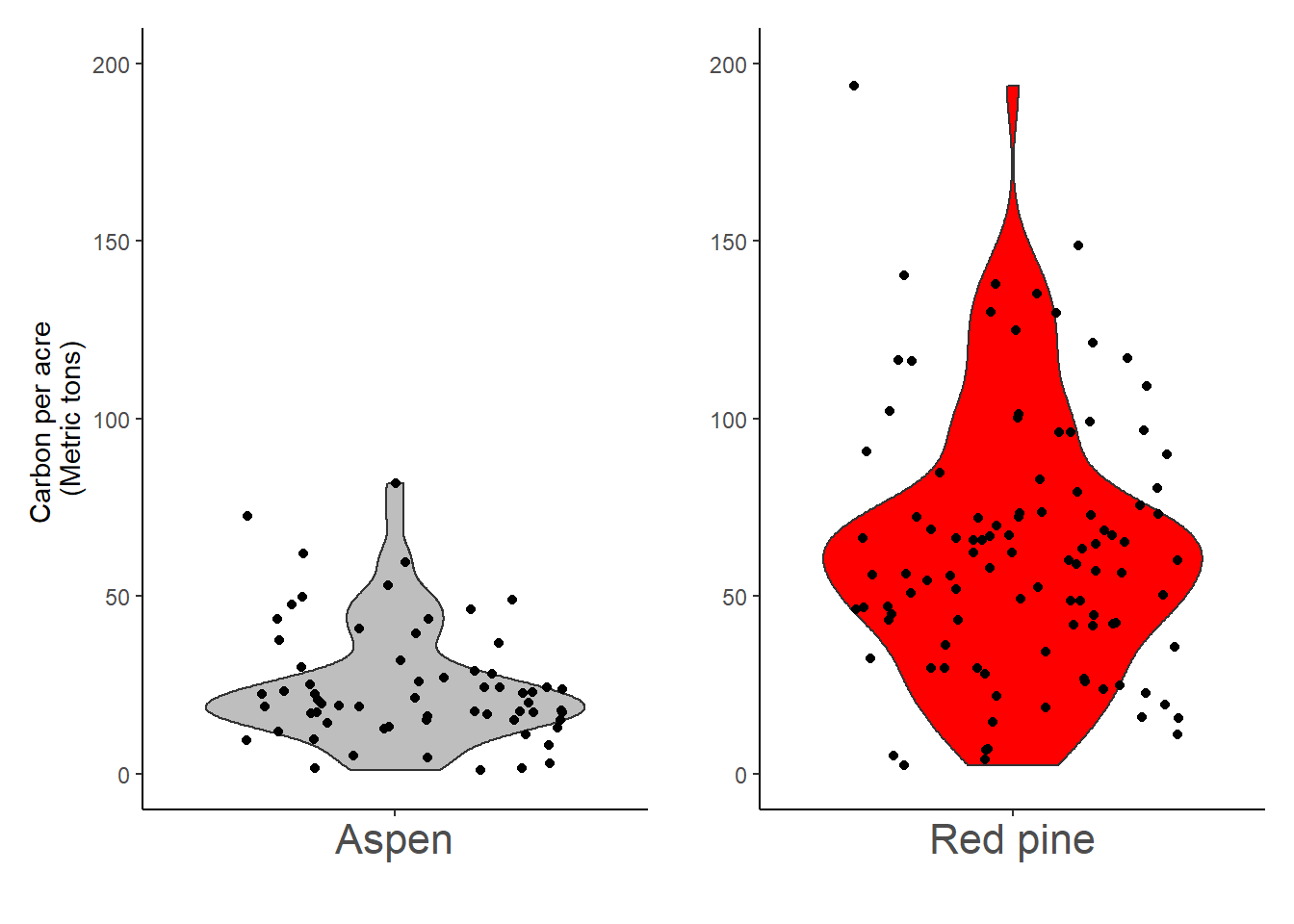 If age and growth rates for trees are available, similar values can be produced that quantify carbon sequestration rates for a species of interest. In the CFC example, aspen stands sequestered approximately 0.9 metric tons of carbon per acre per year in live trees. This can be compared to the volume growth rate of just over one cord per acre per year for aspen growing at the CFC.

This post was previously published by the Forest Resources Association as Technical Release 20-R-3. Special thanks to Tim O’Hara for his review of this post.

Getting your data into R from Google Sheets

Disentagling the interactions between site index and disturbance