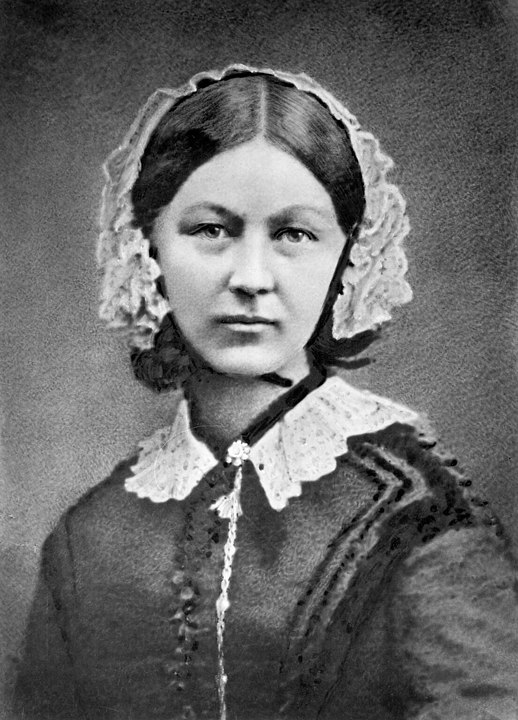 In 1858 the general public was familiar with seeing statistics presented in tables. Visualizations showing statistics and data were not widely used and were difficult to construct. One visualization that was shown to Queen Victoria in this year would live on and continue to be used in the 21st century.

Florence Nightingale, among many roles, was a pioneer in statistical graphics. As a nurse, Nightingale was a witness of war deaths and the medical care of soldiers. For the benefit of the general public, she synthesized vast amounts of data on hospitalizations and medical care.

Nightingale popularized the use of the polar area diagram, also called a coxcomb plot or rose diagram. Polar area diagrams are similar to pie charts, but they have identical angles and extend from the plot’s center depending on the magnitude of the values that are plotted.

In celebration of Nightingale, who was born 200 years ago this year, it’s worth thinking about how polar area diagrams might be fitting to visualize forestry data.

I wanted to use polar area diagrams to answer one question: In which months do forest inventories occur across the United States?

I queried the US Department of Agriculture’s Forest Inventory and Analysis (FIA) database to obtain the months that forests were inventoried. The specific variable I was interested in was MEASMON, a variable contained in the PLOT table that lists the month in which the forest was inventoried.

Here is a table of the results:

The result was about what you might expect for a country that has mostly temperate forests and where field work is limited to many regions in the winter months. The total number of FIA plot measurements was smallest in December (12,786 measurements) and largest in June (22,836 measurements). Not surprisingly, the majority of FIA plots are measured in the summer months when field work is most active. 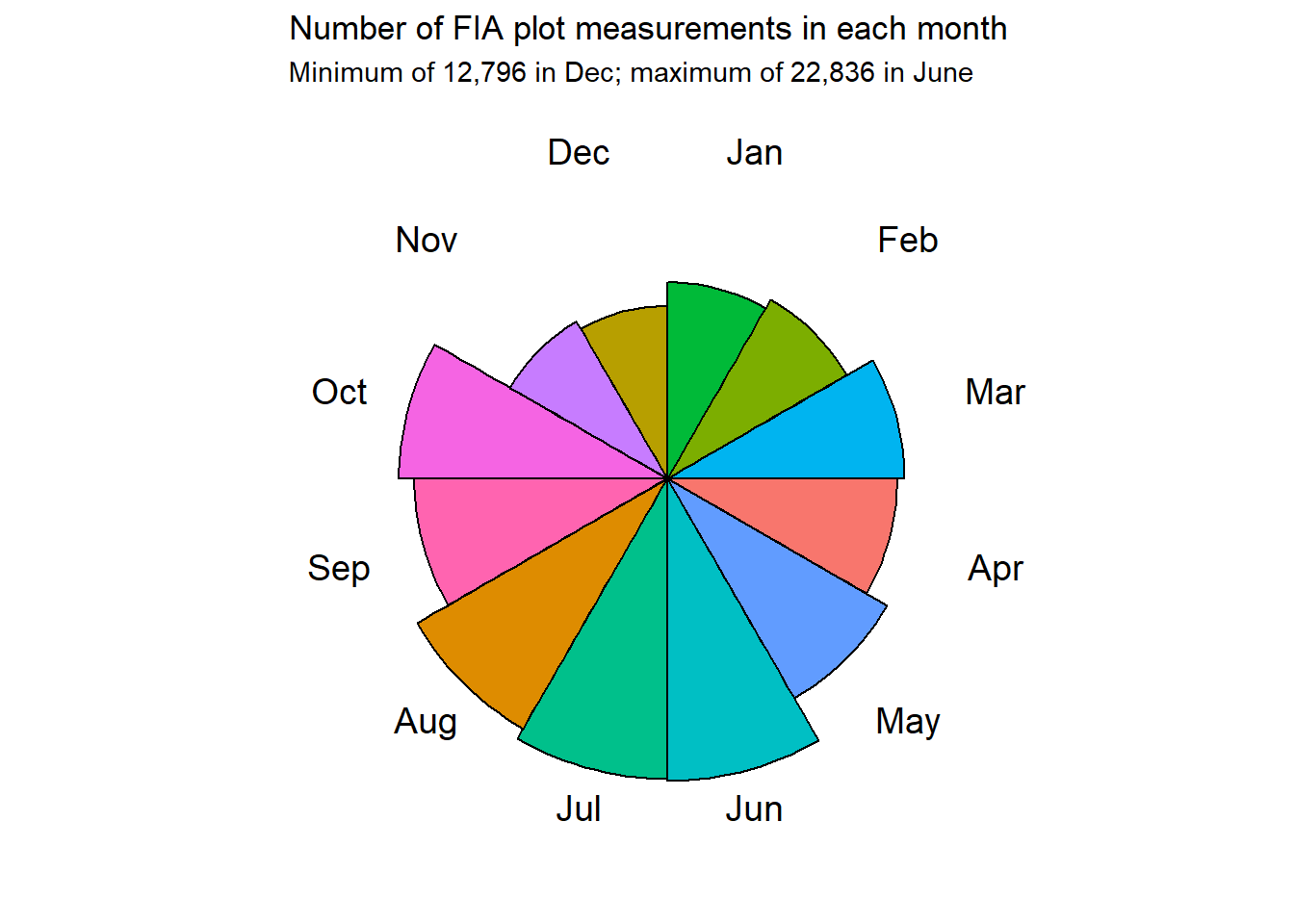 The monthly trends in forest inventory data collection is not constant across different regions in the US. In the Southeast and North Central regions of the US, the number of forest inventories occur at generally the same rate across the year. 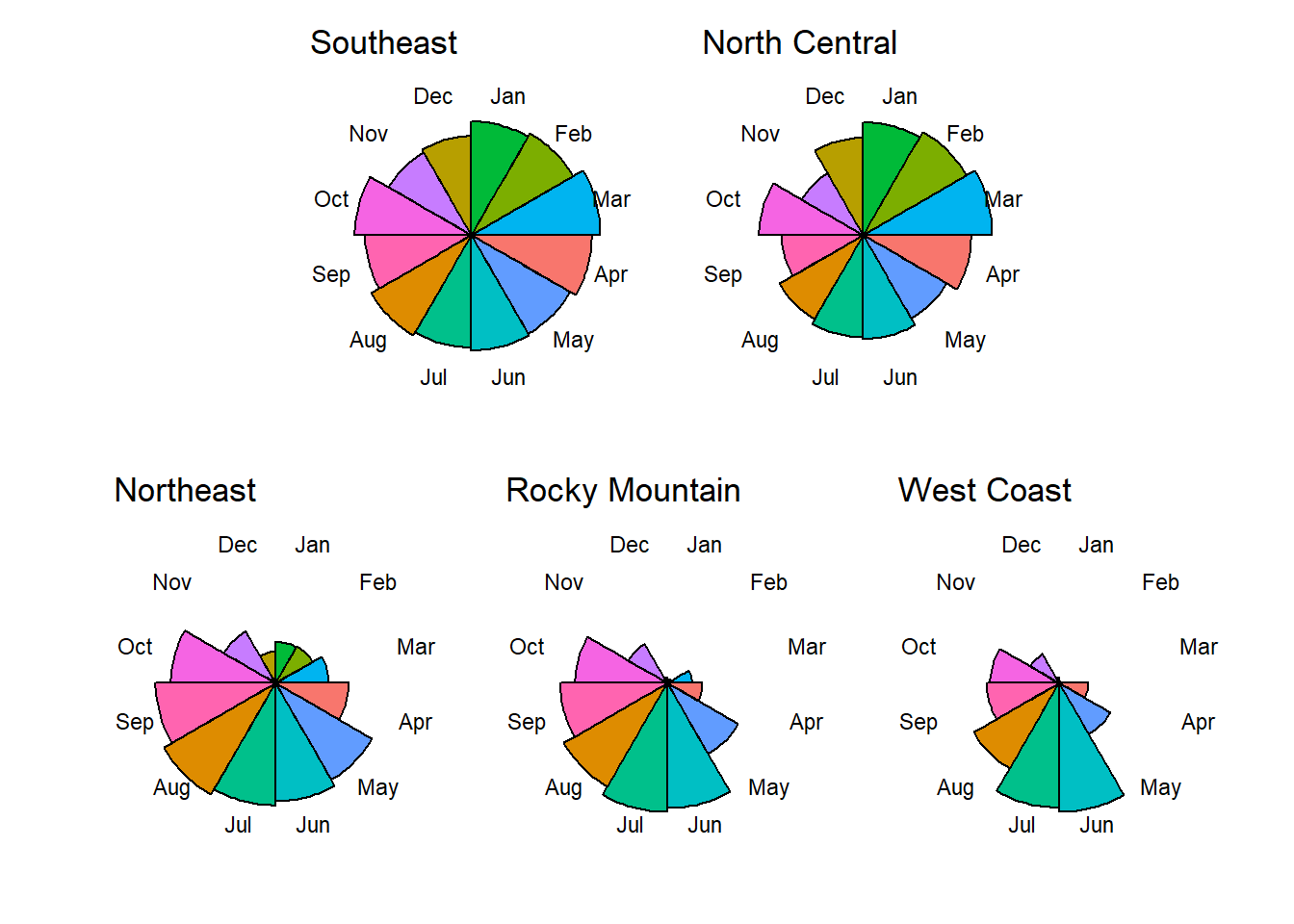 The polar area diagrams using the FIA data are revealing because they show cyclical data through the calendar year and they visualize the number of plot measurements in each month. Other visualizations of these data could include a pie graph or histogram, but the polar area diagram can make each data point “pop”.

Polar area diagrams are a mix of pie charts and histograms. They have identical angles and extend from the plot’s center depending on the magnitude of the values that are plotted. Popularized by Florence Nightingale in the 1850s, polar area diagrams can be an effective way to visualize cyclical data in forestry settings.

Trends in forest carbon papers in the last 20 years