P-ing in the woods: p-values in forest science

A meme about p-values. Hat tip to Matt Dancho for the idea for the graphic.

The statistics community has had a lot of discussion in recent years about the role of p-values and statistical significance. This has led some to question if we’re relying too much on them as a way of interpreting results from a statistical analysis.

The “p” in p-value stands for probability, or the probability under a statistical model that a summary of the data would be equal to or more extreme than its observed value. There are few caveats with using p-values and interpreting them.

Lastly, a p-value doesn’t measure the size of an effect or the importance of a result. So a p-value of 0.0001 does not indicate a more important result than a p-value of 0.045. This is where I’ve heard many a graduate student say “My p-value is so small, my results are VERY significant!”

P-values in the Journal of Forestry

So should foresters stop relying on using p-values? Probably not. (After all, I don’t want to be labeled a hypocrite because I use them a lot.) Out of curiosity, I was interested to see how often p-values are used in forestry research.

I set up a small experiment: to look at how many p-values were reported in the Journal of Forestry in 2021 (find the data here).

What counted as a p-value was more complicated then I first thought. Oftentimes authors will mention the true p-value from a statistical test either in the text or commonly in a table of results. However, other times, no doubt a result of the software being used, authors with report the asterisk or double asterisk that shows the significance at a specific level. For example, * and ** were written to denote significance at the 0.10 and 0.05 levels, respectively. Other times p-values will be embedded within figures, which makes finding them with a text string search problematic.

Despite the challenges, out of the 36 research and review articles published in the Journal of Forestry in 2021, 61% did not present any p-values. Here is the distribution of p-values from the articles: 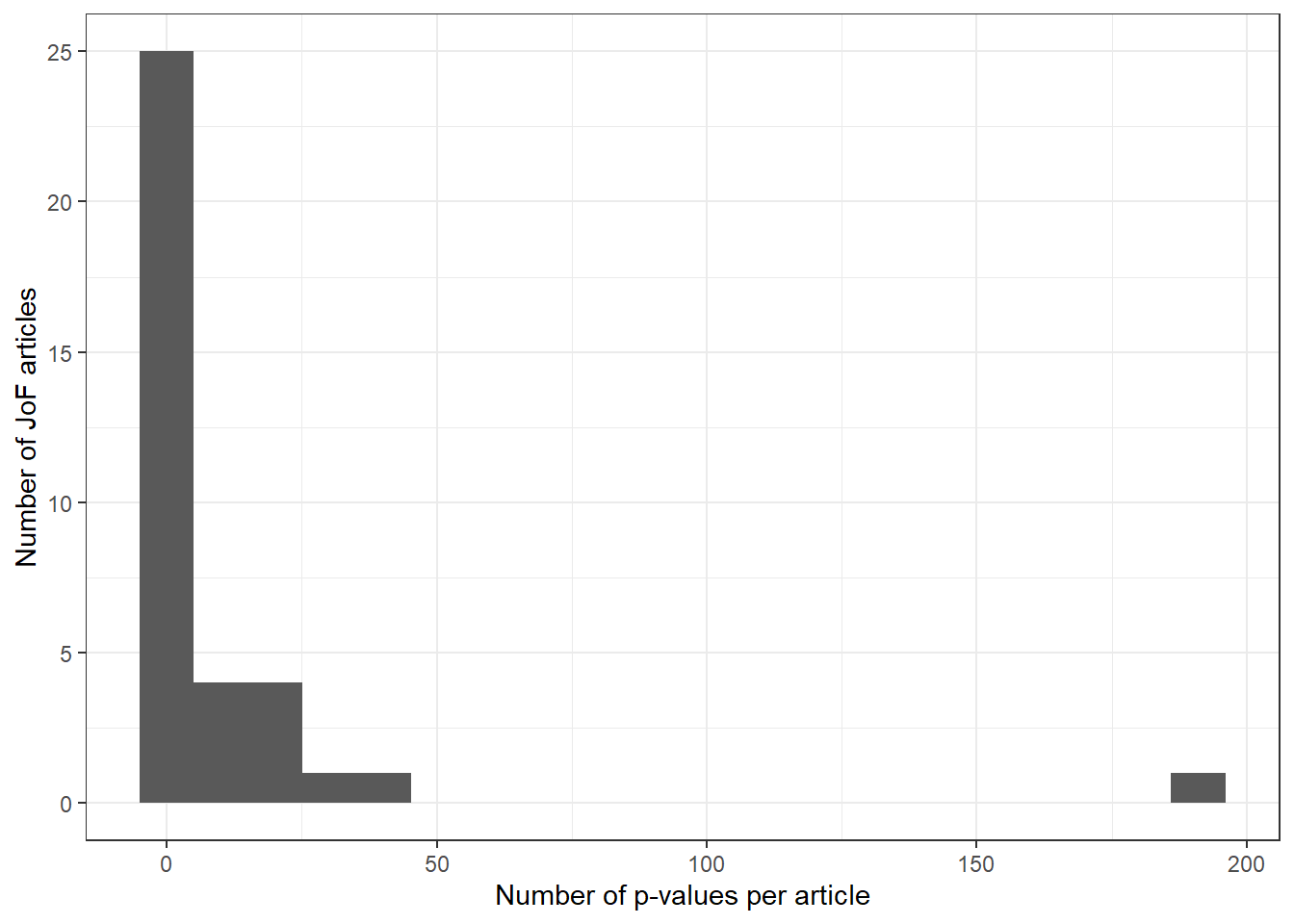 Of those that did present p-values, the median number of p-values per article was 15. There was one paper that presented 191 different p-values (which made excellent use of the asterisk approach).

I have no idea if the use of p-values in forestry has increased of decreased since they began to be used widely in the mid 1900’s. It strikes me that as we continue to teach hypothesis testing to students, p-values will continue to be used in the future.

While there are many caveats, I really like the ASA’s shortcut to “remember ATOM” when using p-values. When thinking about them, remember to:

It’s important to reflect on the role of hypothesis tests and p-values are and what they aren’t. Forest biometricians and analysts should have these in their toolbox, but also be aware of their proper use.

How many homes heat with wood?

How to spot poor data analyses