Doing statistics in the tidyverse: exploring the infer package

If you use R software for your data analysis, you are likely familiar with the tidyverse. The tidyverse package is a “megapackage” in R that includes several packages that import, reshape, and visualize data in a consistent manner, among other tasks.

Like many analysts, I use the tidyverse suite of functions often for importing, wrangling, and visualizing data. More and more I’m using the tidymodels package to apply statistical modeling techniques like regression and random forests on data I work with.

I’ve often wondered how to perform basic statistical tasks, like t-tests and simple linear regression, using a “tidy” approach. In writing code, I always found if clunky to mix writing a series of pipes (%>%), common syntax in the tidyverse, with dollar signs ($), common syntax in base R that specifies a variable associated with a data set. This syntax-switching was always difficult to convey to students learning statistics. While we use one set of syntax for wrangling and visualizing data, we use a different syntax in the same programming language for performing statistical operations. It’s like trying to learn Latin American Spanish and Castilian Spanish at the same time.

I wanted to learn more about the doing statistical tasks in the tidyverse, so in this post I compare how the code written with the infer package compares to those available in base R. I use data sets from my book Statistics in Natural Resources: Applications with R, available in the stats4nr package.

One-sample t-test: base R and infer

First, I’ll load the packages to use throughout this comparison:

The first statistical task I’ll perform is a one-sample t-test for a mean. I’ll use the chirps data set from the stats4nr package to perform a two-sided one-sample t-test at a level of significance of \(\alpha = 0.05\). The data contain the number of chirps that a striped ground cricket makes each second (cps) at various temperatures: 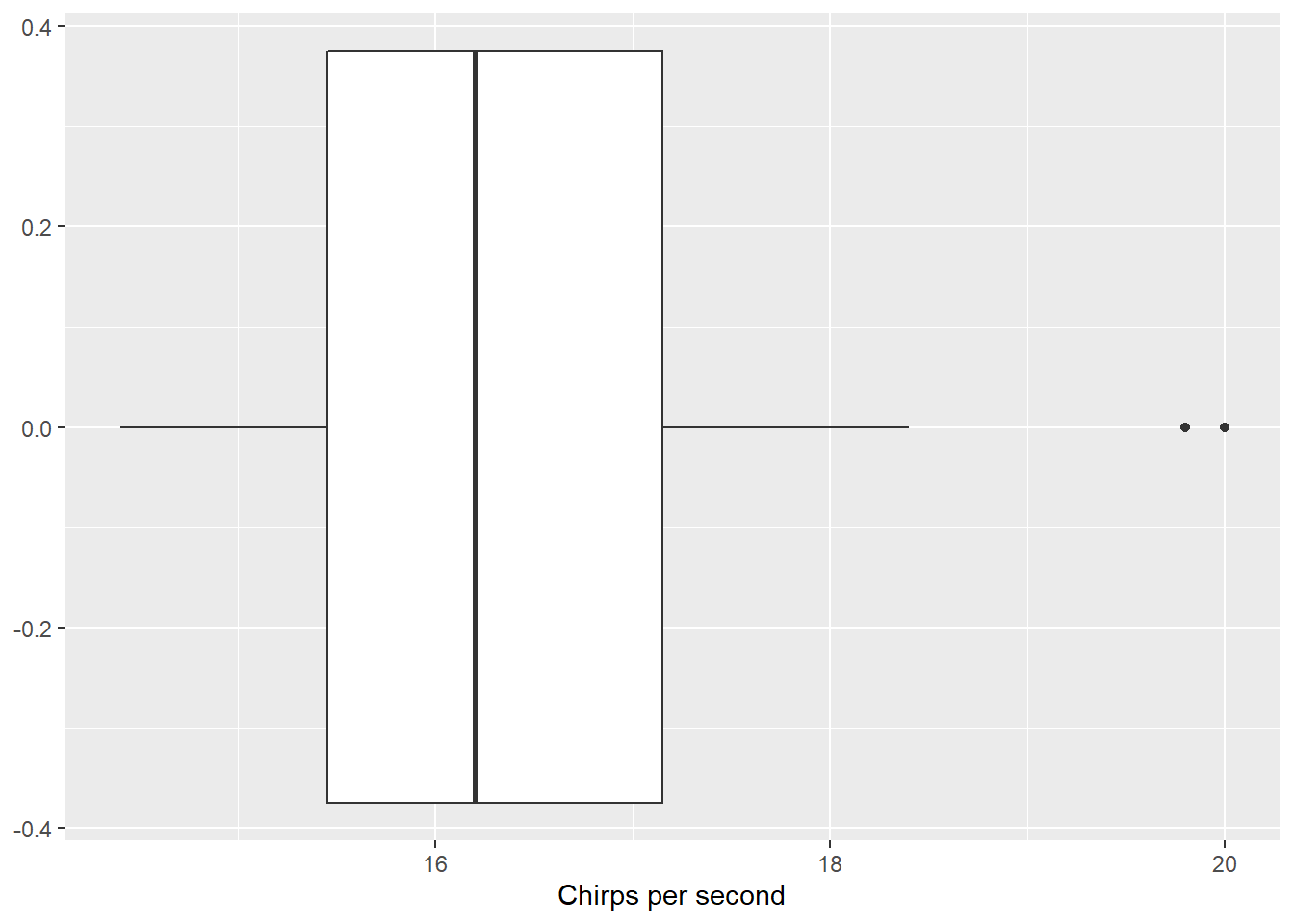 For our statistical test, assume an entomologist makes a claim that a cricket makes 18 chirps per second. Our hypotheses are then:

In base R, the t.test() function performs a number of hypothesis tests related to the t-distribution. We can write the code as:

The output provides the t-statistic, degrees of freedom, p-value, mean number of chirps, and the 95% confidence interval. The p-value of 0.008407 is less than our level of significance of \(\alpha = 0.05\), hence, we can conclude that we have evidence to reject the null hypothesis and conclude that the true mean of the number of chirps a striped ground cricket makes is not equal to 18.

With the chirps data, we can use the t_test() wrapper function available in the infer package to provide similar calculations:

The output is stored in a small data set (a “tibble”) that can be used in subsequent analyses. With infer, more information can be obtained from the analysis by specifying four primary functions, each which are expressed as verbs:

We can perform the same hypothesis test, this time by generating the null distribution using a bootstrap approach with 1,000 samples:

This code produces a data set with 1,000 replicates each with a calculated test statistic (the mean). We can visualize the null distribution and test statistic using the visualize() function: 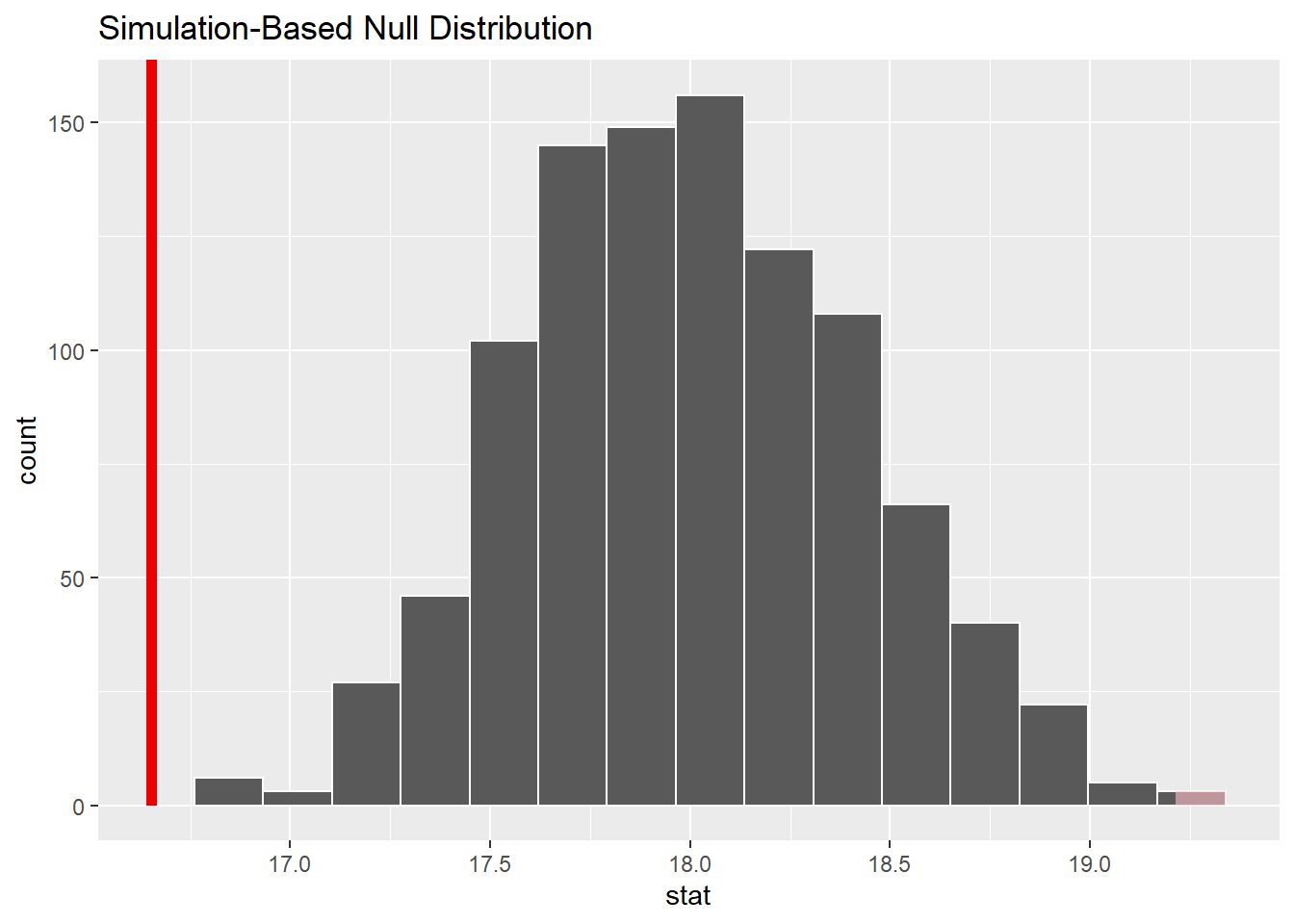 Analysis of variance: base R and infer

The second statistical task I’ll perform is an analysis of variance. I’ll use the iron data set from the stats4nr package which contains iron levels measured at several water depths in Chesapeake Bay. Experimenters took three measurements at six water depths: 0, 10, 30, 40, 50, and 100 feet. The response variable was iron content, measured in mg/L.

Here is the distribution of iron contents at the different water depths: 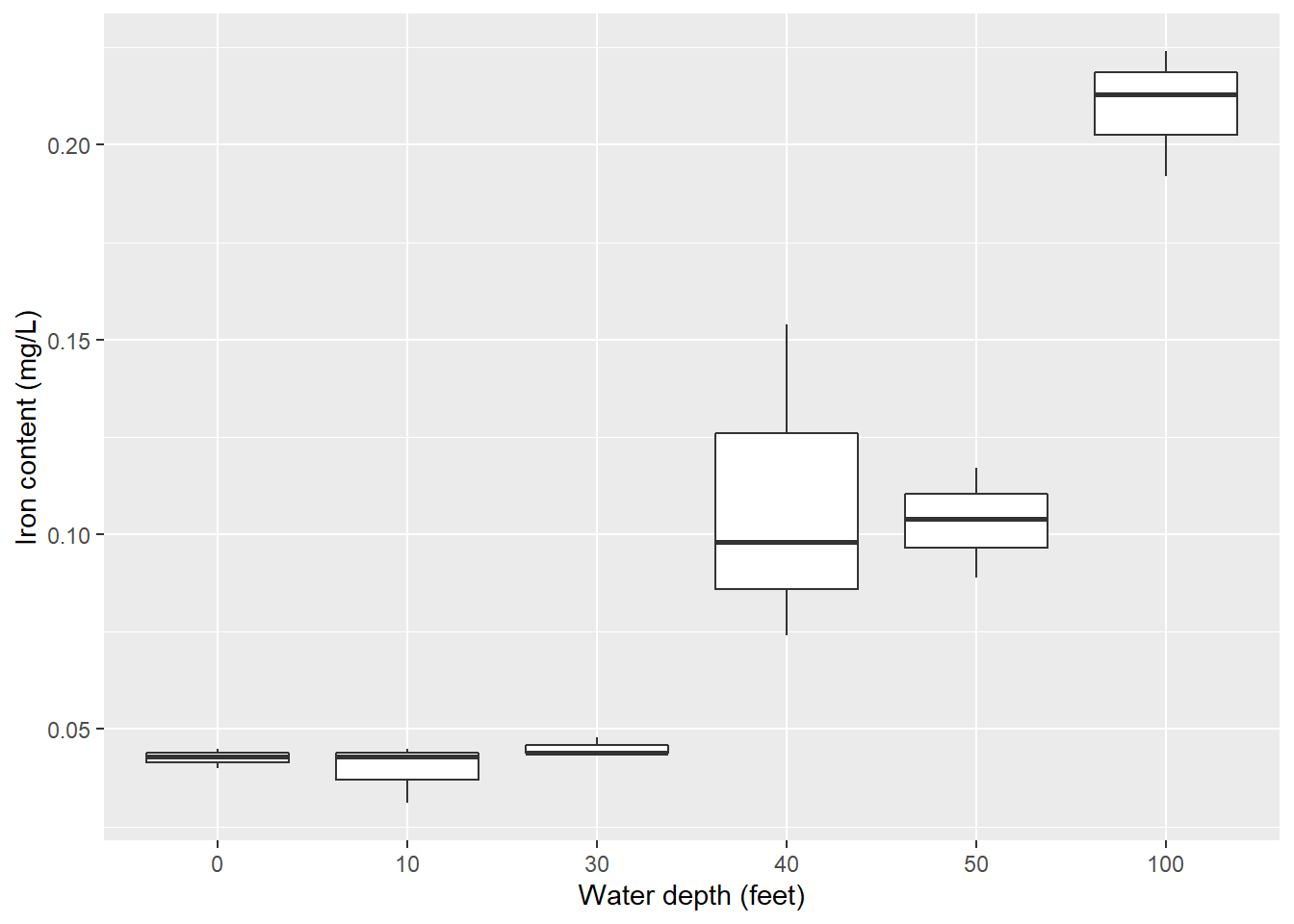 First, we’ll convert the water depth variable (currently stored as a number) to a factor variable. This is because the water depths are labeled as numbers, but they represent categorical variables in our treatment of them in the ANOVA:

In this ANOVA, our hypotheses are:

In base R, we can perform a one-way ANOVA with the lm() function and view the ANOVA table with the anova() function:

The output provides the ANOVA table with degrees of freedom, sums of squares, and mean squares. The F-statistic and p-value provide the results of the ANOVA. Here, we see that with a small p-value of the ANOVA F-test (9.248e-07), we reject the null hypothesis that all iron contents are equal and conclude that at least one mean differs from the rest.

Using the infer package, We can perform the ANOVA by generating the null distribution. We can permute the variables in the iron data set to match each water depth with the iron content levels:

Then, we can calculate the p-value from the observed statistic and null distribution using the get_p_value() function:

In this case, a p-value of 0 is reported, which should be understood after seeing the “Please be cautious…” warning. This result is likely because the observed F-statistic is quite large and unlikely given the null hypothesis:

We can visualize the null distribution and test statistic using the visualize() function to see that the F-statistic is unlikely given null hypothesis: 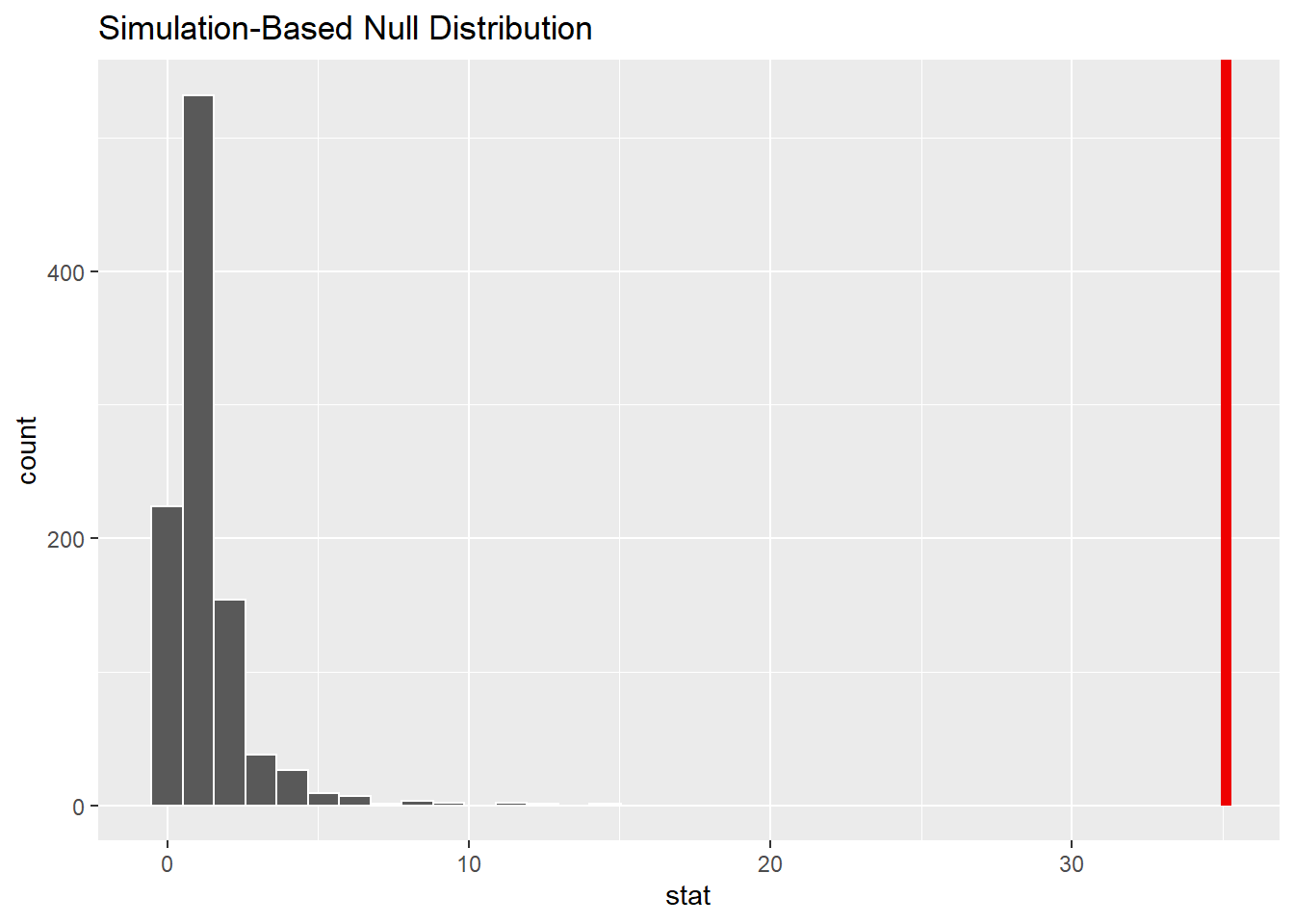 Indeed, observing an F-statistic of 35.1 would be quite unlikely given the ANOVA hypothesis.

Takeaways from the infer package

There are many advantages for using the infer package for completing elementary statistical tasks and teaching them to students. Here are a few:

There are some drawbacks to using and teaching introductory statistics with the infer package:

In summary, I’m glad there is a package that provides a “tidy” approach to performing statistical tests. The syntax and grammar used in the infer package is compatible with how many students are learning R today by using the tidyverse suite of functions and packages.

Timberlands as investments continue to rise